Countdown to sanity: only six weeks left in the Trump presidency! And five weeks after the election, did President Trump finally concede his loss this week? Of course not. Did Republicans in Congress acknowledge President-elect Joe Biden? Of course not. They are showing Americans who they are, a party of cowardly anti-democratic power-hungry sycophants that would sell out our democracy to help their dear leader remain in office. All while wrapping themselves around the flag honoring veterans who fight and die to protect American democracy. Have they no shame? Of course not.

In what one newspaper called the most petulant 46 minutes in American history, President Trump posted a social media video this week that was a meandering summary of his grievances, rants, allegations, accusations, and lies concerning the presidential election.  He again repeated that “the election was rigged” and it “was stolen from the American people” and that “we already have evidence and it’s very clear.” Many speculate that Trump is just milking the turmoil for all the donations he can get from duping his supporters one last time before he leaves office. It is said that he has raised nearly $200 million dollars for his “election defense fund” while spending only what is estimated in the low millions in lawsuits without merit that are being thrown out of court as quickly as they are filed. It is clear that when we are done with Trump in the White House, he will not be done with us. END_OF_DOCUMENT_TOKEN_TO_BE_REPLACED

Posted on December 2, 2020 by RichardBWH

Countdown to sanity: only seven weeks left in the Trump presidency! Yet another week goes by where Trump still does not concede the election. He tweets almost daily like a deranged madman who “can’t accept the results of an election with hundreds of thousands of fraudulent votes cast.” He and his undemocratic coup-plotting lawyers continue to contest and litigate election results in numerous states. But even conservative Republican nominated judges are throwing the cases, with one saying the allegations were put together like “Frankenstein’s monster.”   No other presidential contender in the nation’s history has filed so many legal claims attempting to undermine if not overturn an election. The harm Trump is doing by encouraging his millions of voters to think the election was rigged may rip the country further apart when he finally does leave office and make the divided nation largely ungovernable; his final act of domestic terrorism.

END_OF_DOCUMENT_TOKEN_TO_BE_REPLACED

Bearing Witness to the Pandemic November 2020 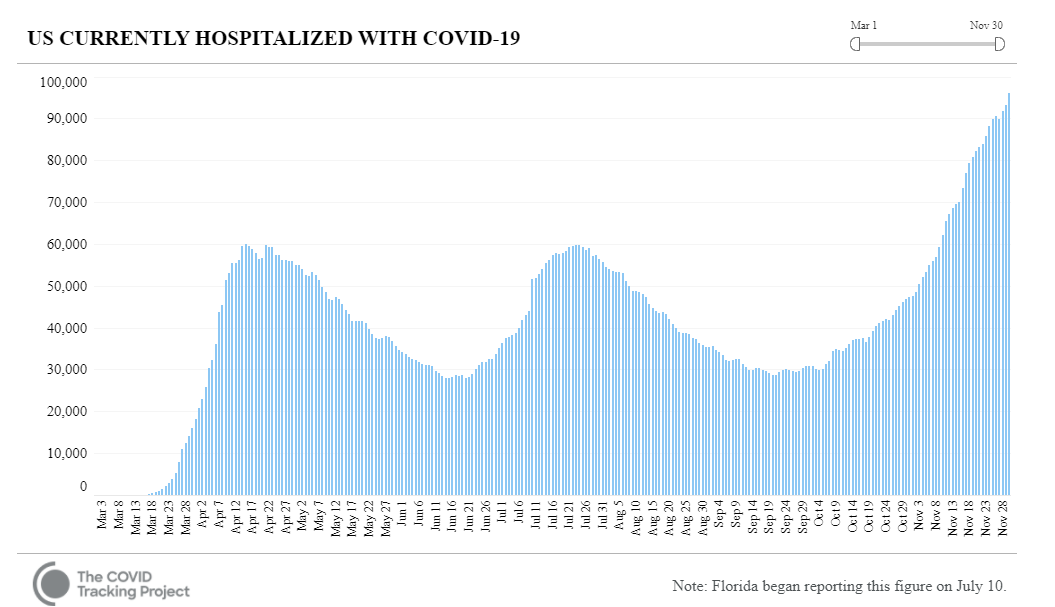 As the month begins COVID cases are soaring uncontrolled across the country. Daily new counts reach an all time high of over 125,000 and fatalities rise above 1,000 per day. In the Spring we would have been under lock-down by now. It seems our leadership has not only failed us but given up, too afraid of the backlash to enforce a national mask mandate much less send everyone back home. They are the cowards, not those of us who wear masks and stay home.

And what does the President do? On Monday the day before the election, Trump threatens to fire Dr. Anthony Fauci from his role on the White House Pandemic Task Force. Trump had previously called the doctor a disaster and idiot. Dr. Fauci had said over the past weekend that there was going to be a “whole lot of hurt” in the coming weeks. Like a Nazi calling for a purge, Trump then worked up his adoring fans at a campaign rally into chanting “Fire Fauci.” And of course this happened at a campaign event in Florida where most did not wear masks or maintain social distancing. Trump was even seen tossing out his Make America Sicker Again hats into the crowd. All this despite a new round of infections within the White House including Chief of Staff Mark Meadows. How fitting that it was only two weeks ago that Meadows claimed they were not going to get the pandemic under control. There is nothing under control inside the White House, especially the President. END_OF_DOCUMENT_TOKEN_TO_BE_REPLACED

The day after the US election on Nov. 3, with results still yet settled, the US officially became the only country of 189 to officially leave the 2015 Paris Climate Agreement fulfilling a promise Trump made nearly four years ago. What a tragedy that makes us, the second largest carbon emitter, not just an outlier but guilty in a crime against future generations, humanity, and the planet. Yet, the rest of the world moves forward without us, along with many states and cities within the US. In the past few months the EU, China, South Korea, and Japan have all announced their goals to become carbon net zero ranging from 2030-2050.

A few weeks later in a virtual meeting of the G-20, President Trump continued to slam the Paris agreement saying it would cripple the US economy and still not save the planet. How ironic that the President’s failure of leadership over the COVID-19 crisis crippled the economy instead. During the G-20 meeting it was China’s President Xi Jinping that took over global climate leadership as the largest economy now fully supporting the Paris accord. END_OF_DOCUMENT_TOKEN_TO_BE_REPLACED

Countdown to sanity: only eight weeks left in the Trump presidency! But three weeks after the election that Biden clearly won – now with 306 electoral votes and nearly 80 million total votes – President Trump still refuses to publicly concede his loss. He has yet to give the go ahead for federal agencies to begin cooperating in the transfer of power, providing national security briefings, sharing plans for the massive vaccine distribution, or approving the GAO to fund the transition. While the President-elect is receiving secret service protection, he can’t even get highly secured communication facilities to use in his temporary office before moving into the White House. Is anyone surprised? Trump told us what would happen months before the election when he said he would not commit to honor the results or a peaceful transfer of power. On Sunday the President tweeted “I concede NOTHING! We have a long way to go.” Twitter marked the tweets with warning labels. This is the state of our democracy under Trump. END_OF_DOCUMENT_TOKEN_TO_BE_REPLACED

By refusing to accept the results of the election, Trump now completes the autocrat’s playbook checklist. He adds this treasonous milestone to a long list of other undemocratic behaviors that include (forgive me for this long list, but don’t blame me, blame Trump): dismantling democratic norms, packing the courts, purging military leadership, demanding loyalty to himself over the constitution, threatening to jail political opponents, ignoring laws and subpoenas from the legislative branch, refusing to commit to a peaceful transfer of power should he lose, encouraging violence and insurrection, dehumanizing his opponents, promoting division and hatred, calling the press the enemy of the people, admiring and fawning over other dictators, prosecuting whistle blowers, profiting from business dealings while in office, intimidating and threatening witnesses, pardoning supporters and allies who are convicted felons, politicizing the Voice of America leadership, cooperating if not colluding with the enemy, inviting foreign interference into our elections, working up crowds at his rallies into a frenzy as if a cult, wanting military parades, using the justice department as his personal attorney, installing family members into leadership positions, claiming he was above the rule of law, and of course lying lying and lying as the demagogue without morals he is. Short-lived White House Communications Director Anthony Scaramucci rightly called his former boss the “American Mussolini.” END_OF_DOCUMENT_TOKEN_TO_BE_REPLACED

As the election week begins, the President is crisscrossing the East and Midwest US in a mad dash to save his reelection. His closing pitch breaks more norms of sitting Presidents as it is not one promoting unity, hope or even a bright future under a second Trump term. Instead, it is one of apocalyptical fear, division, grievances, and victimization. He lies and complains more than he campaigns or champions his (lack of) accomplishments. He celebrated supporters for running a Biden campaign bus off a road in Texas, mocked even Fox reporters for wearing masks, whined about the fake news media as usual, and accused doctors of fabricating COVID deaths for the money. He continued to lay the groundwork for contesting the election by accusing mostly Democrat-led states and their governors of conspiring to cheat like “you have never seen.” He threatened to send in the lawyers and go all the way to “his” supreme court after the election. And of course he continued to claim the election was rigged as there is no way he should lose. END_OF_DOCUMENT_TOKEN_TO_BE_REPLACED

Posted on November 3, 2020 by RichardBWH

As the nation nears election day, the stress, anxiety, and fear is being felt everywhere on both sides of the political spectrum. How quickly the character and soul of America has changed in the past four years under the divisive fear-mongering of one person, Donald Trump. And how must the beacon of democracy look to the rest of the world? The President previously said that he may not accept the results of the election and this week said that there will be trouble in the streets if his reelection is denied. Storefronts are being boarded up in anticipation of civil unrest. National guard units are being put on standby. Biden campaign buses are being driven off the road by a caravan of Trump trucks. Voters are harassed while they wait in long lines to vote. Lawyers are already preemptively filing cases attempting to restrict the counting of votes. And nearly 100,000 Americans test positive on one day for a deadly disease that has claimed 230,000 lives. END_OF_DOCUMENT_TOKEN_TO_BE_REPLACED

Bearing Witness to the Pandemic October 2020

Posted on November 2, 2020 by RichardBWH

A coronavirus infection strikes the President of the United States this week who after two days of illness is transported to Walter Reed Hospital. The President is at high risk due to his age, high blood pressure, and excess weight. However so tragic that it was the same President Trump who had shunned wearing masks, refused to practice social distancing, held public events, disputed the guidance of his public health agencies, bickered with his task force members, mocked others including Joe Biden for wearing masks, and admitted to intentionally delaying the country’s response to the growing health emergency back in the early spring. Not even the handling in the communication of the President’s health emergency was done well by the White House. Nor did his doctors level with the American people when they gave an overly optimistic report initially while insiders describe a perilous very concerning period before Trump left the White House for the hospital. END_OF_DOCUMENT_TOKEN_TO_BE_REPLACED

Posted on November 1, 2020 by RichardBWH

European scientists announced that worldwide last month was the warmest September on record. Arctic sea ice also fell to its second-lowest on record for the month. NOAA is standing by its earlier prediction that 2020 will go on record as being one of the top hottest years on record.

In a speech to the United Nations virtual annual meeting this year, China’s President Jinping pledged to make China net carbon neutral by 2060. He also moved up the estimated date that China’s carbon emissions will peak to before 2030. China is one of 60 countries that are signatories to the Paris Climate Agreement from which the Trump administration has tragically withdrawn the US.  To meet these goals China will have to completely transform its economy. In doing so it will likely surpass the US in political and technology leadership to save the planet from climate change. END_OF_DOCUMENT_TOKEN_TO_BE_REPLACED