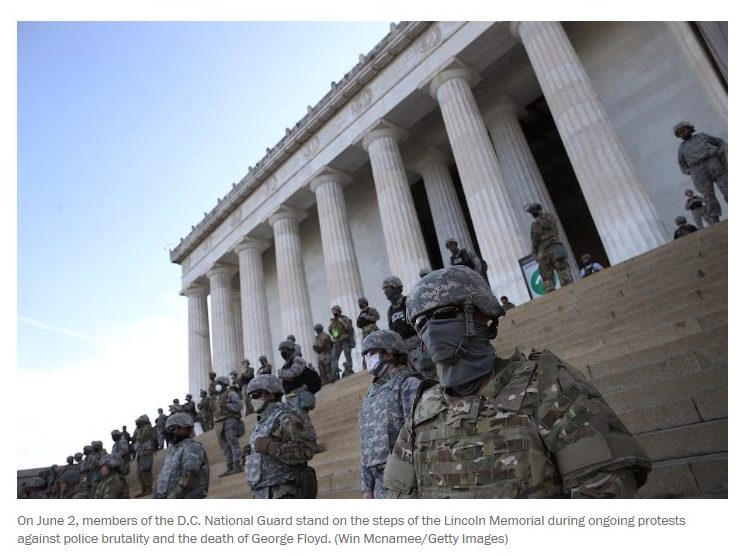 In the days following the attack on peaceful protesters in Lafayette Park to make way for the President’s photo op, the “People’s House” has been turned into a fortress with new fences, barricades, and members of the armed forces standing guard. A buffet of federal law enforcement agencies were called up by the White House from the Defense Department, FBI, Homeland Security, Park Police, Customs and Border Patrol, Bureau of Alcohol, Tobacco and Firearms, and Bureau of Prisons. Trump even had troops from the 82nd Airborne on standby at bases outside the city. Yes, the rapidly deployable 82nd that the country proudly sends first into armed conflicts around the world to fight our adversaries was put on standby for deployment in America.

Trump later said in an interview that Washington was in great shape and one of the safest places on earth because he has used a “dominant” force and he was “president law and order.” Trump even had national guard troops dispatched to surround the Lincoln Memorial, of all sacred monuments where Martin Luther King gave his magnificent “I have a dream” speech. That most sad of all photos of troops surrounding the memorial went viral around the world.  Armored vehicles patrolled the streets of D.C. and low flying helicopters were used to hover over and harass protesters.

We all knew this day was coming from an aspiring autocrat like Trump. This is what has come to our nation’s capital during the 41st month of the Trump reign of chaos, lies, and downright evilness. The man is acting more and more like a besieged dictator, such as Saddam Hussein, than a dutifully-elected president of a democracy.

The week after Trump tweets “when the looting starts the shooting starts” the president in a call with governors admonishes them that they are weak and look like fools for not being tough enough on protesters who he called terrorists. He advised the governors to “dominate” protesters, perform “retribution”, and if they don’t dominate they are wasting their time. He warns that he will send in the U.S. military, his “wonderful military”, if the governors can’t end the unrest. Yes, to the dismay of Americans at home and our allies abroad, this is coming from the President of the United States. Trump’s Secretary of Defense Esper also shocks the nation by using the words “dominate the battlespace” in his guidance to the governors as if he was laying the grounds for military action against American citizens, in addition to tens of thousands of state national guard troops already deployed.

The president raises the prospects that he will use the Insurrection Act of 1807 (yes, 1807, more than 200 years ago) as a ruse to deploy armed forces of the country into American streets against American citizens. His actions only incite more violent reaction from all corners of the country as protests continue to mount due to the murder of George Floyd in Minneapolis. Coincidentally, it was 31 years ago to the week that the Chinese used its military to assault pro-democracy protesters in the famous Tiananmen Square incident. Trump probably thought that was “another beautiful thing to watch” which he said about the National Guard crackdown on American protesters this past week.

Thank God for retired members of the U.S. military, including former Joint Chief Chairs, who one after another this week dutifully denounced Trump by saying things like the American public is not our enemy and America is not a battleground. Democrat presumptive nominee Joe Biden commented that Trump suffering from narcissism should try reading both the bible and the constitution. Former Defense Chief General Jim Mattis went public lambasting both Trump and Esper saying that Trump was the first president in his lifetime who does not try to unite Americans and instead tries to divide us. Fomer Chief of Staff John Kelly and even Republican Senator Mitt Romney joined in to defend Mattis from Trump’s twitter attacks on his former chief when he said that Mattis seldom brought home the bacon and lacked leadership skills.

Finally, Esper admitted his mistakes and began withdrawing troops from the D.C. area saying the 1807 insurrection act should be used in only the most urgent and dire situation, and this was not one. It was reported Trump was so irate that he threatened to fire Esper, his fourth defense secretary, and had to be talked out of it by other White House and Congressional advisors.  The current Joint Chiefs Chairman Mark Milley was so alarmed that he even saw fit to issue a message to his commands that the armed forces swear an oath to the constitution, meaning not to the president. Former Presidents Bush, Carter, Clinton, and Obama all spoke out on American rights to protest and peacefully petition their country, putting their aside their political party differences.

News from the U.S. circulating around the world became so bad that even Pope Francis said he was praying for us. Global leaders had to warn the U.S. to uphold international norms to protect their citizens, journalists, and news reporters on the ground, several whom have been roughed up or arrested even on live TV shoots. Even Russia criticized the U.S. for brutality (and hypocrisy) directed at its own people. How did our country fall so far so fast? One word, we have been Trumpized.

Trump denies that the secret service took him into the White House bunker over the previous weekend for his own safety. He said he took a quick tour of the facility and that was it. I imagine he was so enraged with being forced into a bunker that this drove his reaction the next day to have federal authorities in riot gear clear the park across from the White House of largely peaceful, lawful protesters. He and his press secretary also denied tear gas was used to disperse protestors from Lafayette Park to make way for his entourage to walk to St. John’s Church for the photo op. More lies.

Another 1.9 million Americans filed for unemployment this past week bringing the total to nearly 42 million. However, in a surprise announcement, the BLS said that the economy added 2.5 million jobs last month and that the official national unemployment rate went down to 13%. How convenient for the Trump administration. But wait, another surprise, there was an “asterisk” stating that some data was misclassified. The actual number is now said to have been 16%. But wait again, 42 million Americans have filed for unemployment which would make the unemployment closer to 25%. Can we believe anything that comes from this administration?

Americans are tired of being locked down, tired of the pandemic, tired of being out of work, tired of injustice, tired of the vitriol coming from Washington, and most surely tired of Trump. I imagine that much of the outrage due to the death of George Floyd under the knee of an oppressor is that so many of us also feel so helpless and hopeless in living through a nightmare combination of a racial crisis, policing crisis, justice crisis, pandemic crisis, economic crisis, gun violence crisis, climate crisis, education crisis, inequality crisis, international trade crisis, political leadership crisis, and what will surely be an electoral crisis this fall. And each and every one of those crises is being made worse or exploited by Trump and his Republican co-conspirators in dismantling what truly makes our country great.

The President and his AG Barr have started to blame left-wing extremists like Antifa for the unrest, without proof. Some analysts have said that right-wing groups and foreign operatives are also just as likely to have been fueling the violence. An estimated 10,000 Americans have now been arrested for charges that range from resisting arrest, failure to comply, failure to disperse, failure to obey curfews, and of course it seems ever so sadly for just being black.

Social media firms continue to pull back promotion of President Trump’s inflammatory language. This week it was Snap which followed actions last week by Twitter to begin adding warning messages to some of Trump’s tweets.

Our international relationships with trading partners continue to deteriorate. This week the Trump Administration announced that the U.S. will bar flights in and out of the country by Chinese airlines. But by the end of the week the administration changed its mind.

Trump spoke with Russia’s Putin this week. I can just imagine Putin congratulating Trump for roughing up protesters, threatening Americans with violence to dominate them, and turning Washington DC into a fortified armed encampment with federal troops on the streets. Or maybe Putin even offered to send Russian troops into the US to help Trump establish law and order? The central topic of discussion was said to have been Trump’s desire to expand the G7 by adding Russia back in since they were expelled due to their annexation of Crimea in 2014. He sure must owe the Russians for something big. I just wish the Russians would promote him and take him off our hand and out of our land.

The above news items have been taken from a number of international, national, regional, and local news media sources including print, digital, and broadcast. Additional editorial opinions and comments about these news items are those of this author.